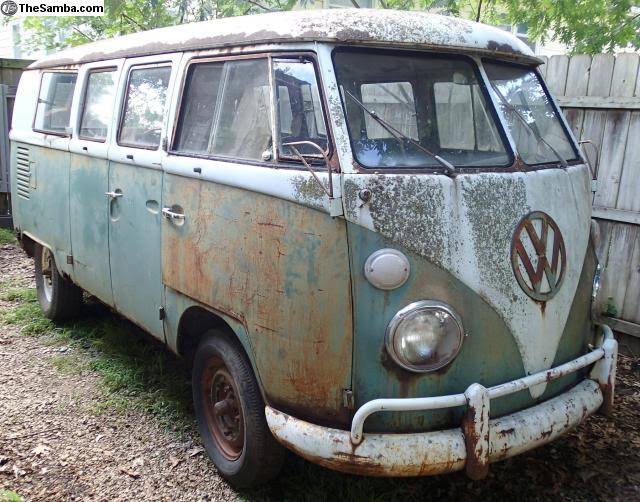 So many years back I had the urge to look at vw beetles again, I owned an Orange Super Beetle back when I was in school that me and my friend Chad had dragged home from a barn out in the country. Loved tinkering with this beetle and was amazed at how they were made! There is something about driving a vw that attracts you to them they give you a certain “in the now” feeling!

So I was searching around craigslist and other sites and came upon thesamba.com a forum that was all that is vw!  I went to browse and found that I had to become a member! I read lots of forum posts and happen to be reading the split bus forum and became very interested. I went to look at the classified vehicles and was looking at the busses and the double cab vw’s at the time in which I never knew even existed!  Many months went by and I had checked the forum religiously every day for a bus or double cab that would be in my price range.  One day I was checking and an individual had just posted a double cab vw truck, I thought awesome! Promptly called and they said the double cab had just sold 5 minutes ago to a person in California, DARN!

For the next few months I had scowered the classifieds and finally came upon a 1965 velvet green and white vw bus in Missouri.   This bus was what I would have called the classic looking vw bus with green and white paint and a neat green vw logo on the front and it was a Split window!  I looked over the photos and found it to be very rusty and needed a lot of work!  None the less I called the individual selling the bus and we struck a deal! That weekend I went to pick up the bus with one of my other road trip buddies Bubba another great adventure was had!

That’s how I came to own Scrappy, now the name for this bus didn’t come till recently.  My wife always has said for many years that this bus was a heap, and wasn’t her “Cup of Tea”.  One night we were sitting on the couch and I was watching some vw videos on YouTube, she doesn’t like to watch this sort of thing on tv.  She said that she didn’t want to watch tv about about of scrap metal.  I promptly said they are not scrap metal!  She said “that thing you got is to scrappy! ”  I said “hey that would be a good name for the bus” they name these busses don’t you know?  She laughed and that’s how my wife named my bus “Scrappy”!